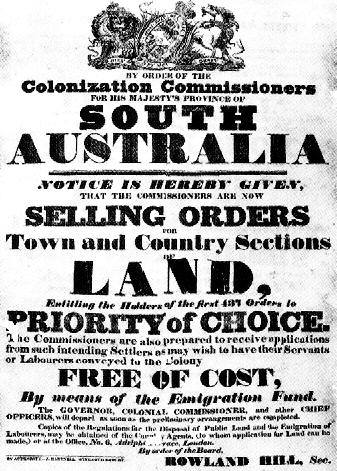 This week it’s like getting blood from a stone with South Australian births, death and marriages. (When only a few weeks ago, I did an article on Tasmania and wrote about the ease of finding records for family historians.)  It’s confusing, it’s frustrating and it is painstaking work. A lot of the resources are offered through many different sources and many are offered offline. However, right now I’m not blowing a hole in a genealogy budget by booking a ticket to Adelaide anytime soon. Compulsory registration happened in 1842, but South Australia was settled from 1836. Thankfully this is only six years of life in the colony, but in that six years there was quite an influx of free settlers. By 1840, there was over seventeen thousand free settlers in the colony. To find what they got up to in that six years, I have a few places for you to search for South Australian births, deaths and marriages.

Your first search would be of shipping records, to find how and what circumstances that your ancestors arrived in the colony.  It’s important to remember that South Australia was not developed as a place for sending convicts. It was a place for free settlers to have a good and prosperous life. Much thought was put into settling South Australia and before any free settlers even set foot in South Australia the land had been named, planned and sold. The man behind this plan was Edward Wakefield and ironically he came up with the idea while serving time in Newgate Prison. Wakefield wanted a solution to the overcrowding and the crime in the UK and proposed a free settler society. The only problem was getting labour. So his idea was to sell the land and then use the proceeds to finance passage for skilled workers and their families. It was called the Wakefield plan and it was successful from 1836 till 1840, when funds run out.

The passenger lists for these free settlers can be found at the State Library of South Australia’s website http://www.slsa.sa.gov.au/fh/passengerlists/SAships1840.htm. The information can include the name of the person and their age (many lied though, as there was age restrictions), their occupation, their previous address overseas and their partner and children’s names and ages. However for many there is only basic information listed. (My own family of Warrens is listed on the 1840 journey on the Fairfield.)

As South Australia consisted mainly of free settlers, not everyone would have been recorded coming into the area. However, through the 1830’s, newspaper reporters would quite regularly go down to visit the arriving passengers to get their details.  To search for these passengers, go to Trove at http://trove.nla.gov.au/.  (I have an earlier blog on Trove that can give you tips in getting the most out of your searches.)

In most states, births, deaths and marriage indexes are generally available online through the government registry. However in 2012, Genealogy SA published the indexes online.  Genealogy SA is the genealogy society for South Australia. It’s not the government registry. This means that you need to search the index that Genealogy SA provides and you can either buy a transcription – which is a typed record of the certificate – or you can then order the certificate from South Australia’s births, deaths and marriages. This is quite different to states like New South Wales where the registry holds the index for you to search and you order directly from them.

Between 1836 to 1842, local churches held records to important events in the colony. There were a number of early churches in the area and the following website has records from them. http://www.jaunay.com/earlybdm.php .  Scroll down to the search box at the bottom of the screen. If you find a record then there is the option of paying for a look up of the record from the websites order form. Another website that has indexes for South Australian Births, Marriages and Deaths is at http://www.familyhistorysa.info/. There you will find indexes on Births covering 1836 to 1860, Marriages 1836 to 1856, Deaths 1836 to 1855. And early cemetery records for South Australia can be found through http://www.aca.sa.gov.au/Records

In 1841, a census was taken in South Australia. Although the information included in the census was basic, it still can give you an idea of the make up of the family. After searching for information on the census for the Warren family, I realised that their daughter Amelia had passed away shortly after arriving in Adelaide. This meant I started searching for records and found her buried in the West Terrace cemetery. http://www.jaunay.com/census.php

If your family has origins in South Australia, it is certainly possible to find the information but it may cost a bit more and take a bit more searching. Putting the pieces of the puzzle all together is all part of the process sometimes. So keep searching and keep going, as it’s all worth it.