Ancestry research Vietnam War and the return of the steel trunk

Vietnam War and the return of the steel trunk 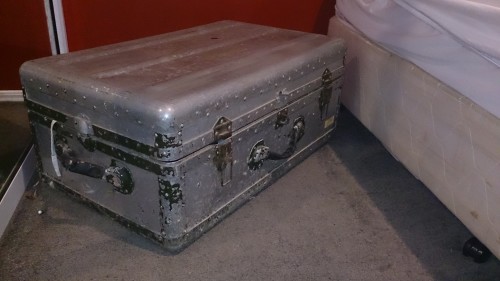 When I was 15 I decided that with my part time job I would buy stuff to one day move out. I had an older brother with many items in his house that used to be in our family home and thought Mum would run out of things to give by the time I moved out. So my stepfather gave me this steel trunk. It was painted green on the outside and was peeling badly. I tidied it up and packed it with all my worldly possessions dreaming of my future life. I really didn’t give too much thought to what that trunk had been and where it had been. I knew it was from Vietnam War and returned without it’s owner. I knew my stepfather had pointed out his relative in a poster of all the men that died in Vietnam that was hanging at a market one day. It’s one of those things I see every day and until reading a few articles on how important possessions returned from the war are to those that get them back, I have not really given much thought.

I wanted to know more about this trunk and googled it , (of course). In Trove, I found an article calling for tenders to make 15,000 aluminium trunks for the RAAF in 1954. The RAAF had always used a blue kit bag and “crammed like sardines” all their clothes in an undignified way. I then found a picture of one of the trunks on ebay. It had that familiar green paint I remember but it also had “Puckapunyal – Sgt Dawson”. So I imagine the trunk originally had a name on it, I was disappointed that I had gotten that green paint off now. The only other article I found was a Vietnam veteran that returned from war and sent his trunk home with some friends. His mother found these uniformed officers at the door with her son’s trunk and thought the worst. He wrote that his mother had a few choice words for him. Lol.

So the person that owned my trunk was John Edgar Garrett. He was the nephew of my stepfather. I had always misunderstood and thought he was a younger brother. I also had never realised the he had my stepfather’s name but in reverse (Edgar John Garrett was my stepfathers name). I felt sad to realise that now. John had been part of the 1st Field Squadron in the Royal Engineers with the RAAF. Due to the TET offensive, John’s squadron had been brought to the area to protect American bases and the Fire Support Base.  John and three other engineers were on standing/patrolling duty. The North Vietnamese launched a surprise mortar attack on the Fire Support Base and the tree the engineers were standing under and they were all killed on the 18th February 1968.  (John was part of a group of ten engineers, due to further attacks and mines only four survived the war.) I found these articles after the first article in Trove mentioned John’s death as part of “Operation Coburg”.  So I searched for both his name and Operation Coburg through google. One of the accounts was written by a soldier that had to go up to the scene, he realised that one of the other soldiers was a school mate and had only been married two weeks before.

When searching for most soldiers that National Archives is the best place to start looking for service records. For the Vietnam War there is the separate search site of the Vietnam Roll http://www.vietnamroll.gov.au/VeteranSearch.aspx . Search your relatives name there first. (Take note of the service number and regiment they were from as these facts can give you a world of information and make sure you have the right person. ) The Australian War Memorial also will give details after searching the name and let you know where your relative has been memorialised. There are some war records on the subscription websites like ancestry and findmypast. However I think you miss finding more out about the conflicts if you don’t visit the War memorial and looking up Wikipedia gives a good general background for specific battles and places that your ancestors fought in.

My stepfather died last year and for me that trunk holds his memory. I did not know his nephew and I feel very sad to not have thought and asked about what memory of his nephew that the trunk held for him. But I guess this is only something that you realise with age. It seems crazy that inanimate objects pull at your heart. That they can hold a bridge to memories. To know that someone you loved held them can send you into tears. I hope that everyone cherishes those special things. I’m sure many have probably had conversations like me with my children about why that baby blanket that was the last thing their great grandmother knitted cannot be used as a cubby house roof.  Lest we forget.