Ancestry research Can I get war medals replaced?

Can I get war medals replaced? 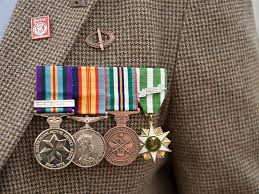 It depends. I know of a lot of people that would love to know about  or have the war medals that their ancestors were given.  But many of these medals have been lost, stolen or simply misplaced. I even found a website that tries to locate owners of war medals that have been found. It seems such a shame that those that fought don’t have the rewards to show their service. That some of these medals have been stolen, found in the gutter after ANZAC day or simply left behind when cleaning out a deceased estate.

The first step in your search for war medals is seeing what your relative did during their military service.  This first step means looking at their service records available from the National Archives of Australia. www.naa.gov.au . In the service records you should be able to find what medals were awarded. One the home page you can ‘search the collection’ then do a ‘record search’ and from there ‘name search’. If you were looking through a service record or World War One there are generally three stamps for the 1914-1915 Star, Victory Medal and the British War Medal. If there is a ‘NE’ over the medal it means that they were ”not entitled”. If there is a number on the stamp it means they were awarded the medal.

Be careful in assuming what your relative was eligible for. In the case of my great Uncle Horace who forged his age to go to war early and got sent to France, he only received a British War Medal. I had thought he may have been eligible for the 1914-1915 Star and the Victory Medal but there are very tight guidelines on dates of enlistment, specific dates and places being named as theatres of war. It is only the Department of Defence that can award medals and you are best to contact them to see.

If you want to get Australian war medals replaced then visit the following website and fill in the application form.  (The Department of Defence is upgrading their website, so if this link doesn’t work, then go to their home page and do a search for medal replacement) http://www.defence.gov.au/medals/content/policy/replacements.asp

However there are a few points to note. Generally it is only the initial recipient who is entitled to be reissued with their war medals. They are allowed to have a reissue of medals once only. (The reissued medals have a small ”D” for duplicate stamped on them but are generally the same as the original.) If the initial recipient is deceased then generally your only option is to purchase replica medals from commercial companies. However with many natural disasters that have happened the government has allowed families to apply for special consideration.

So I hope that helps you on your search for those elusive medals. ANZAC day is coming up quickly and with the 100 year anniversary it seems appropriate that war medals should be dug out and proudly displayed. Another point to note is that if you want to get the medals replaced by the Department of Defence, their waiting time is around six months to process the applications currently. It may be an idea to look at replicas if you want to have them by ANZAC day. Lest we forget.